Release pipelines in Azure Pipelines help your team continuously deliver software to your customers at a faster pace and with lower risk. You can fully automate the testing and delivery of your software in multiple stages all the way to production. Or, set up semi-automated processes with approvals and on-demand deployments.

See Releases in Azure Pipelines to understand releases and deployments and watch the following video to see release pipelines in action.

How do release pipelines work?

Release pipelines store the data for your pipelines, stages, tasks, releases, and deployments in Azure Pipelines. 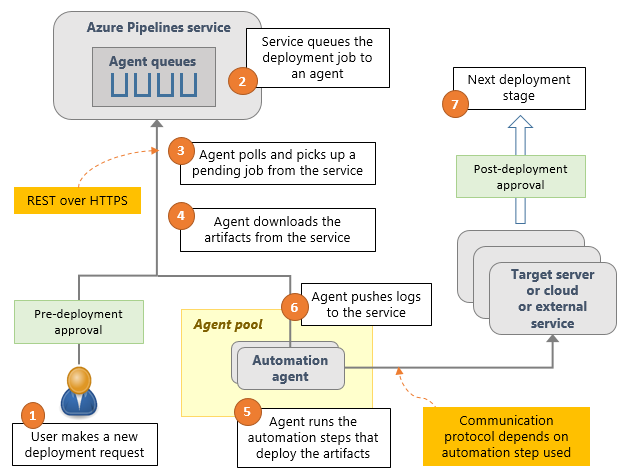 Azure Pipelines runs the following steps as part of every deployment:

How do I use a release pipeline?

An artifact is a deployable component of your application. It's typically produced through a Continuous Integration or a build pipeline. Azure Pipelines releases can deploy artifacts produced by a wide range of artifact sources. such as Azure Pipelines build, Jenkins, or Team City.

Define the release pipeline using stages and restrict deployments into or out of a stage using approvals. Define the automation in each stage using jobs and tasks. Use variables to generalize your automation and triggers to control when the deployments should be kicked off automatically.

See the following example of how deployment automation can be modeled within a stage:

In this example, a job is used to deploy the app to websites across the world in parallel within production ring 1. After all those deployments are successful, a second job is used to switch traffic from the previous version to the newer version.

Check out the following articles to learn how to:

What is a draft release?

Creating a draft release allows you to edit some settings for the release and tasks, depending on your role permissions before you start the deployment. The changes apply only to that release, and don't affect the settings of the original pipeline.

Create a draft release using the "..." ellipses link in the list of releases:

... or the Release drop-down in the pipeline definition page:

How do I specify variables I want to edit when a release is created?

In the Variables tab of a release pipeline, when you add new variables, set Settable at release time for the variables that you want to edit when a release gets created and queued.

Then, when you create a new release, you can edit the values for these variables. 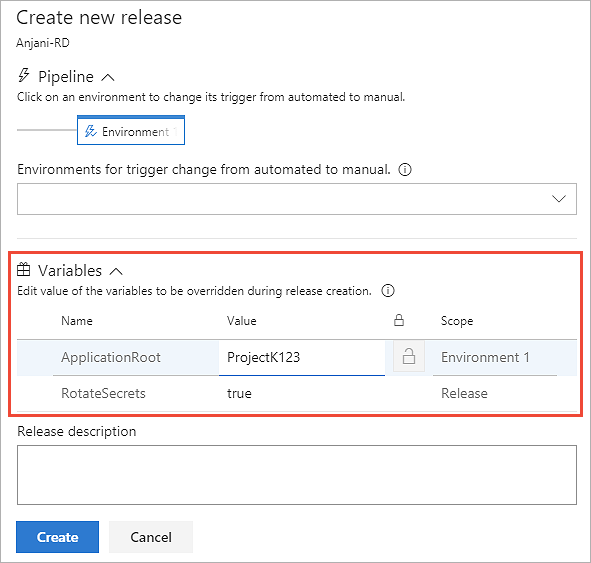 How do I integrate and report release status?

With release pipelines integrations, you can report your deployment status to multiple sources such as your repository host, your work items (links or deployments), or to Jira issues.

The deployment status is displayed in the following areas of Azure Repos:

Select this option if you want to link your release pipeline to your work items. The deployment status will be displayed in the Links tab of your work item. 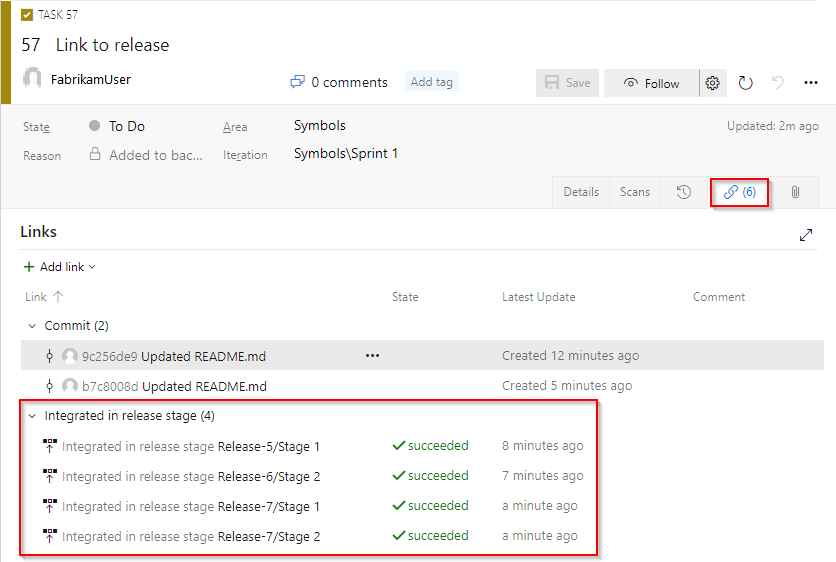 Select this option if you want to link your release pipeline to your work items and display the deployment status in the Details tab of your work item. 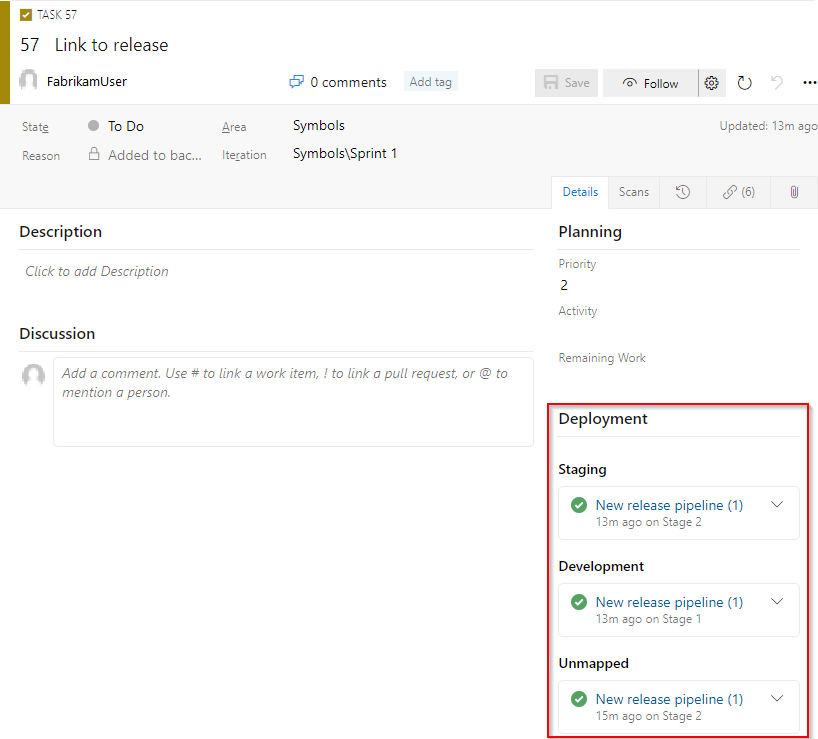 Select this option if you want to display the deployment status on an external website. You can copy the stage badge and add it to your website to have a visualization of your deployment status:

Select this option if you want to link your release pipeline to Jira issues. You must install Azure Pipelines for Jira and connect your Azure DevOps organization with your Jira account. Check out the Jira integration tutorial for more details.

When should I edit a release instead of the pipeline that defines it?

You can edit the approvals, tasks, and variables of a previously deployed release. Do so instead of editing these values in the pipeline from which the release was created. However, these edits apply to only the release generated when you redeploy the artifacts. If you want your edits apply to all future releases and deployments, choose the option to edit the release pipeline instead.

When and why would I abandon a release?

After you create a release, you can redeploy the artifacts to any stages that are defined in that release. This is useful if you want to do regular manual releases, or set up a continuous integration stage trigger that redeploys the artifacts using this release.

If you don't plan to reuse the release, or want to prevent it being used to redeploy the artifacts, you can abandon the release using the shortcut menu that opens from the ellipses (...) icon in the Pipeline view of the pipeline. 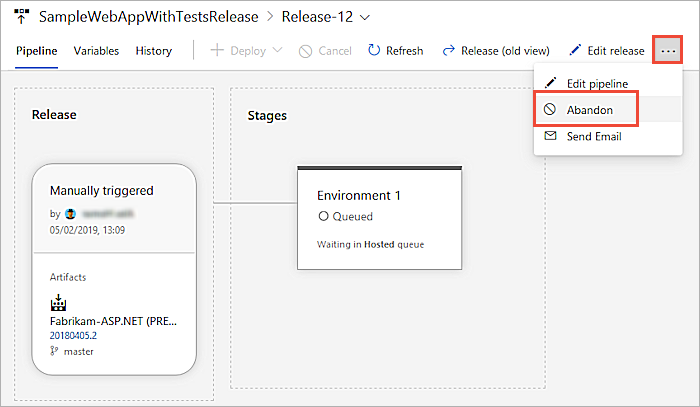 You can't abandon a release when a deployment is in progress, you must cancel the deployment first.

How do I send release summaries by email?

After a release is triggered and completed, you may want to email the summary to stakeholders. Use the Send email option on the menu that opens from the ellipses (...) icon in the Pipeline view of the pipeline. 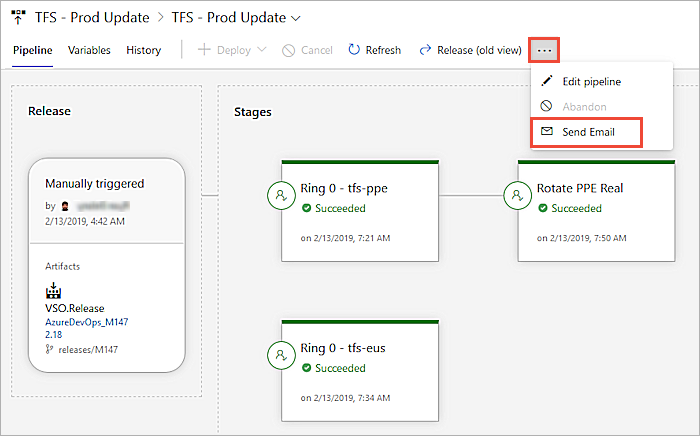 In the Send release summary mail window, you can further customize the information sent in the email by selecting only certain sections of the release summary.

How do I manage the names for new releases?

When specifying the format mask, you can use the following predefined variables.

For example, the release name format Release $(Rev:rrr) for build $(Build.BuildNumber) $(Build.DefinitionName) creates releases with names such as Release 002 for build 20170213.2 MySampleAppBuild.

How do I specify the retention period for releases?

You can customize how long releases of this pipeline must be retained. For more information, see release retention.

How do I use and manage release history?

Every time you save a release pipeline, Azure Pipelines keeps a copy of the changes. This copy allows you to compare the changes at a later point, especially when you're debugging a deployment failure.

How do I set it up to automatically link new work in a build?

When we establish traceability between work items and builds/releases, there are the following two aspects:

The computation for the first bullet is as follows for a build: Let's say, for example, that you started a new build. Whatever the setting, we compute a list of new commits for the build. We do the following tasks:

It could happen that there's no last known successful build on the same branch. For example, when you run a build for the first time on a branch, or when all the previous builds on a branch have been deleted (possibly through retention policies). The list could be long in these cases.

Once we have the list of commits, we enumerate all the work items associated with each of those commits. This is the list that you see in a build.