Retention policies let you set how long to keep runs, releases, and tests stored in the system. To save storage space, you want to delete older runs, tests, and releases.

The following retention policies are available in Azure DevOps in your Project settings: 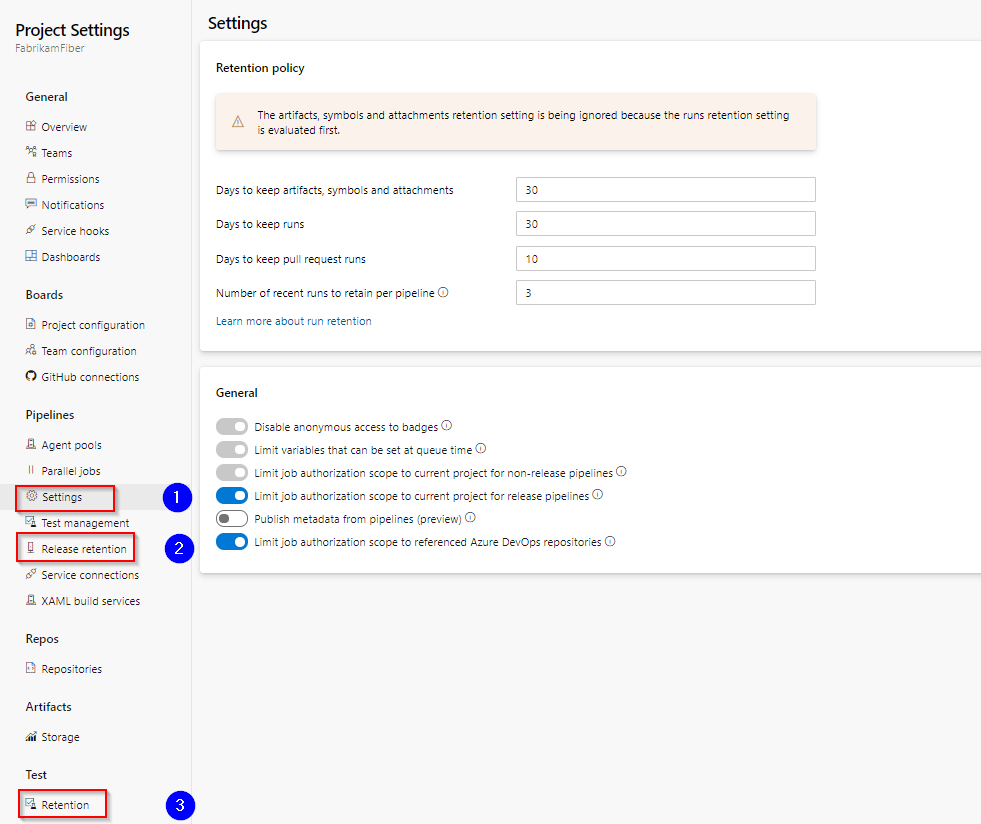 If you are using an on-premises server, you can also specify retention policy defaults for a project and when releases are permanently destroyed. Learn more about release retention later in this article.

To manage test results, you must have one of the following subscriptions:

In most cases, you don't need to retain completed runs longer than a certain number of days. Using retention policies, you can control how many days you want to keep each run before deleting it.

Along with defining how many days to retain runs, you can also decide the minimum number of runs that should be kept for each pipeline.

What parts of the run get deleted

When the retention policies mark a build for deletion, you can control which information related to the build is deleted:

The following information is deleted when a build is deleted:

When are runs deleted

Your retention policies run every day at 3:00 A.M. UTC. There is no option to change the time the policies run.

Retention leases are used to manage the lifetime of pipeline runs beyond the configured retention periods. Retention leases can be added or deleted on a pipeline run by calling the Lease API. This API can be invoked within the pipeline using a script and using predefined variables for runId and definitionId.

You can manually set a pipeline run to be retained using the More actions menu on the Pipeline run details page. 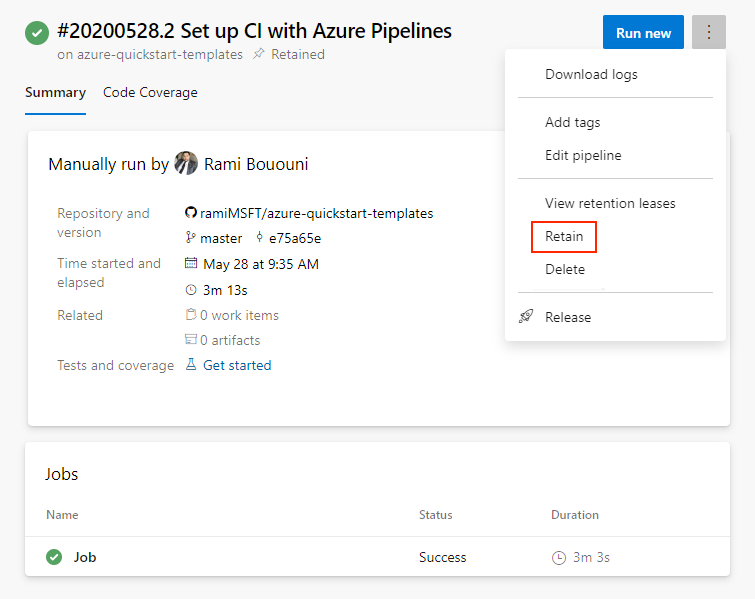 The release retention policies for a classic release pipeline determine how long a release and the run linked to it are retained. Using these policies, you can control how many days you want to keep each release after it has been last modified or deployed and the minimum number of releases that should be retained for each pipeline.

The retention timer on a release is reset every time a release is modified or deployed to a stage. The minimum number of releases to retain setting takes precedence over the number of days. For example, if you specify to retain a minimum of three releases, the most recent three will be retained indefinitely - irrespective of the number of days specified. However, you can manually delete these releases when you no longer require them. See FAQ below for more details about how release retention works.

As an author of a release pipeline, you can customize retention policies for releases of your pipeline on the Retention tab.

You can also learn how to customize these policies on a stage-by-stage basis later in this article.

If you are using an on-premises Team Foundation Server or Azure DevOps Server, you can specify release retention policy defaults and maximums for a project. You can also specify when releases are permanently destroyed (removed from the Deleted tab in the build explorer). 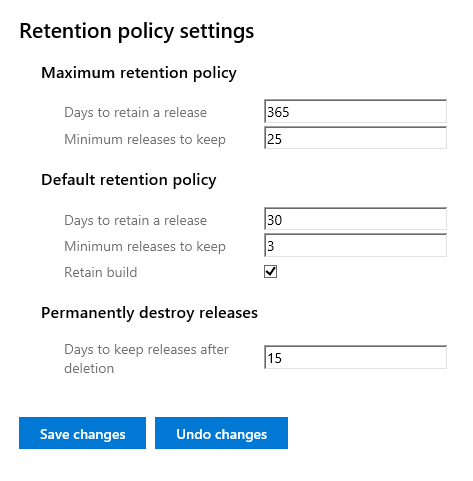 If you are using Azure DevOps Services, you can view but not change these settings for your project.

The maximum retention policy sets the upper limit for how long releases can be retained for all release pipelines. Authors of release pipelines cannot configure settings for their definitions beyond the values specified here.

The destruction policy helps you keep the releases for a certain period of time after they are deleted. This policy cannot be overridden in individual release pipelines.

In TFS, release retention management is restricted to specifying the number of days, and this is available only in TFS 2015.3 and newer.

You may want to retain more releases that have been deployed to specific stages. For example, your team may want to keep:

The following example retention policy for a release pipeline meets the above requirements: In this example, if a release that is deployed to Dev is not promoted to QA for 10 days, it is a potential candidate for deletion. However, if that same release is deployed to QA eight days after being deployed to Dev, its retention timer is reset, and it is retained in the system for another 30 days.

When specifying custom policies per pipeline, you cannot exceed the maximum limits set by administrator.

The build linked to a release has its own retention policy, which may be shorter than that of the release. If you want to retain the build for the same period as the release, set the Retain associated artifacts checkbox for the appropriate stages. This overrides the retention policy for the build, and ensures that the artifacts are available if you need to redeploy that release.

In TFS, interaction between build and release retention is available in TFS 2017 and newer.

You can set manual and automated test run policies. 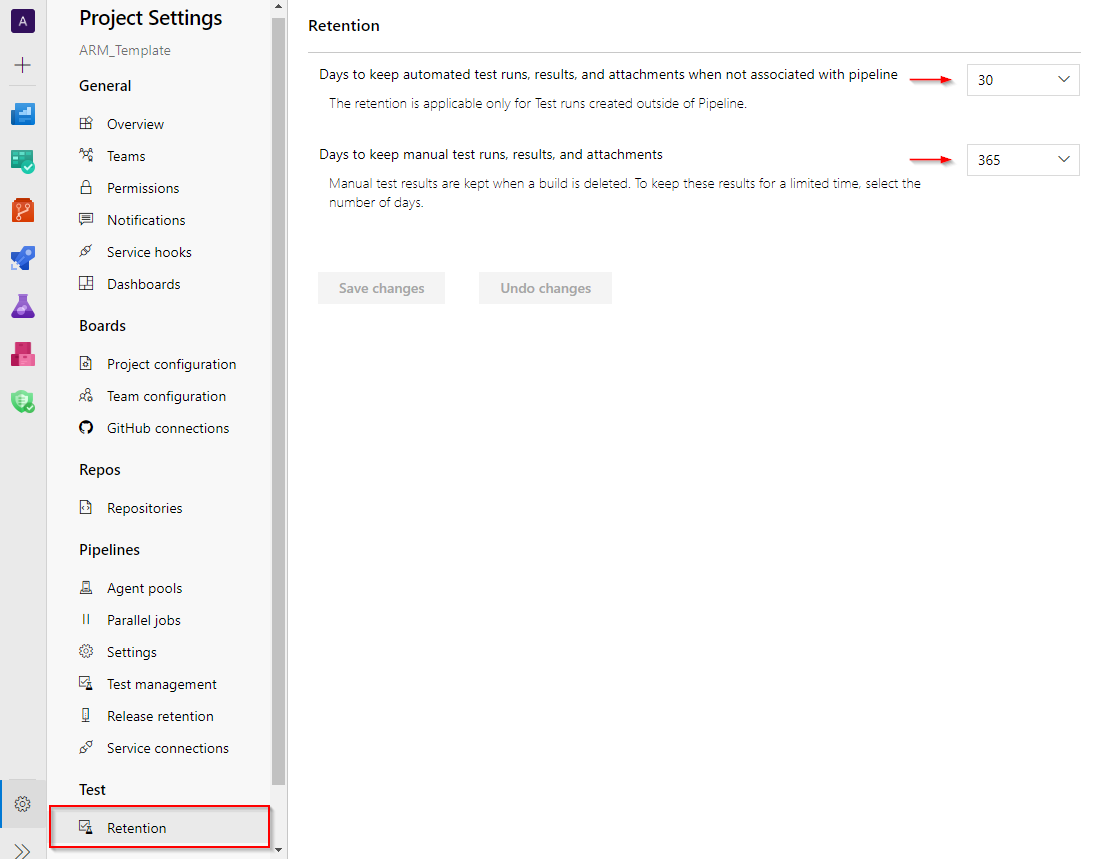 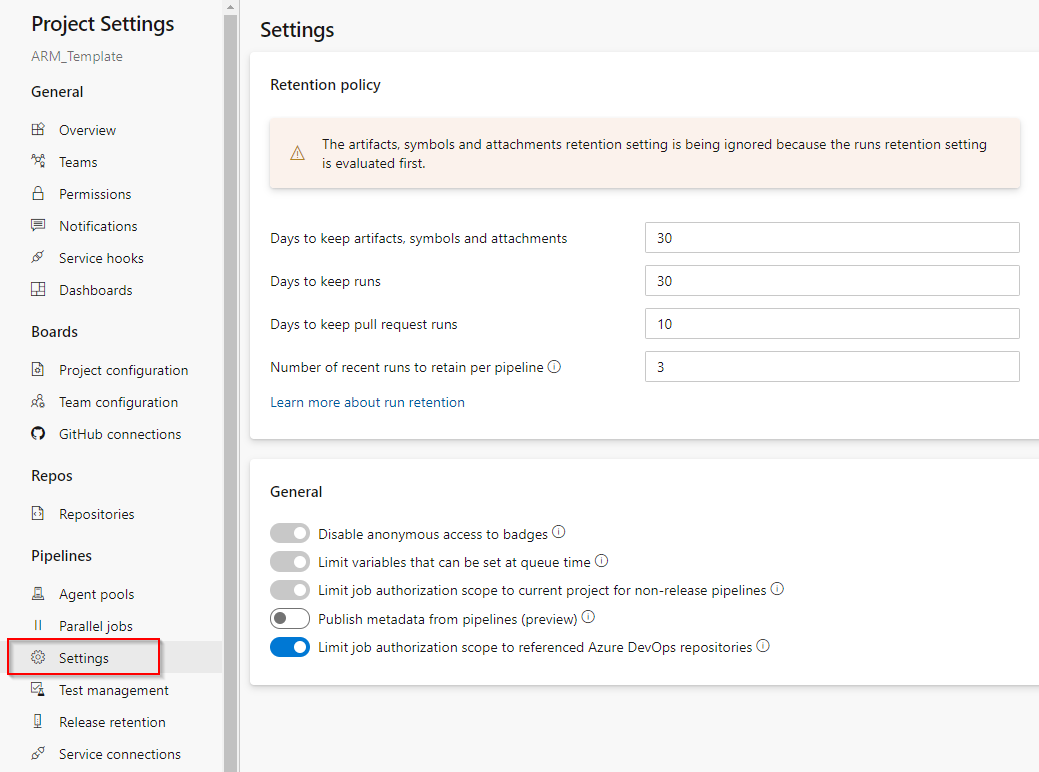 You can set artifact retention policies for pipeline runs in the Pipeline settings.

You can also customize these policies on a branch-by-branch basis if you are building from Git repositories.

You can specify build retention policy defaults and maximums for a project collection. You can also specify when builds are permanently destroyed (removed from the Deleted tab in the build explorer).

The maximum retention policy sets the upper limit for how long runs can be retained for all build pipelines. Authors of build pipelines cannot configure settings for their definitions beyond the values specified here.

The Permanently destroy releases helps you keep the runs for a certain period of time after they are deleted. This policy cannot be overridden in individual build pipelines.

If your repository type is one of the following, you can define multiple retention policies with branch filters:

For example, your team may want to keep:

The following example retention policy for a build pipeline meets the above requirements: 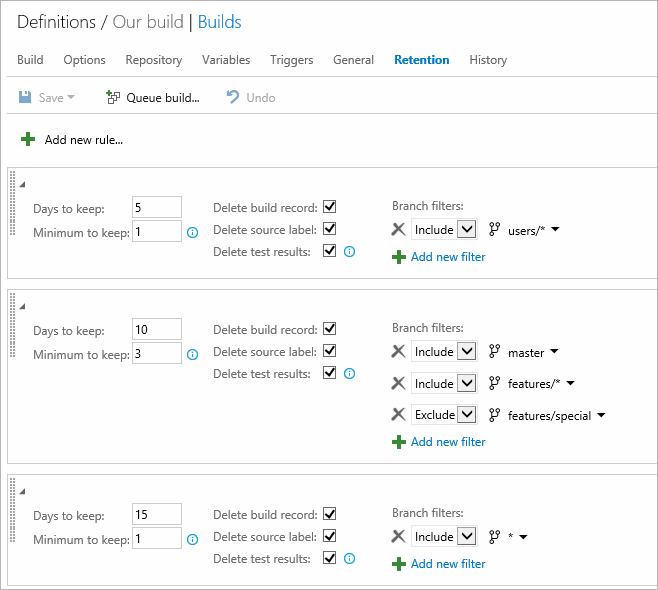 When specifying custom policies for each pipeline, you cannot exceed the maximum limits set by administrator.

If you protect your Git branches with pull request builds, then you can use retention policies to automatically delete the completed builds. To do it, add a policy that keeps a minimum of 0 builds with the following branch filter:

For TFVC and Subversion repository types you can modify a single policy with the same options shown above.

When the system is purging old builds, it evaluates each build against the policies in the order you have specified. You can drag and drop a policy lower or higher in the list to change this order.

The "All" branches policy is automatically added as the last policy in the evaluation order to enforce the maximum limits for all other branches.

If I mark a run or a release to be retained indefinitely, does the retention policy still apply?

No. Neither the pipeline's retention policy nor the maximum limits set by the administrator are applied when you mark an individual run or release to be retained indefinitely. It will remain until you stop retaining it indefinitely.

How do I specify that runs deployed to production will be retained longer?

If you use multi-stage YAML pipelines to production, the only retention policy you can configure is in the project settings. You cannot customize retention based on the environment to which the build is deployed.

I did not mark runs to be retained indefinitely. However, I see a large number of runs being retained. How can I prevent this?

This could be for one of the following reasons:

If you believe that the runs are no longer needed or if the releases have already been deleted, then you can manually delete the runs.

How does 'minimum releases to keep' setting work?

Final retention period is decided by considering days to retain settings of all the stages on which release is deployed and taking max days to keep among them. Minimum releases to keep is governed at stage level and do not change based on release deployed to multiple stages or not. Retain associated artifacts will be applicable when release is deployed to a stage for which it is set true.

I deleted a stage for which I have some old releases. What retention will be considered for this case?

As the stage is deleted, so the stage level retention settings are not applicable now. Azure DevOps will fall back to project level default retention for such case.

My organization requires us to retain builds and releases longer than what is allowed in the settings. How can I request a longer retention?

The only way to retain a run or a release longer than what is allowed through retention settings is to manually mark it to be retained indefinitely. There is no way to configure a longer retention setting. You can also explore the possibility of using the REST APIs in order to download information and artifacts about the runs and upload them to your own storage or artifact repository.

I lost some runs. Is there a way to get them back?

How do I use the Build.Cleanup capability of agents?

Setting a Build.Cleanup capability on agents will cause the pool's cleanup jobs to be directed to just those agents, leaving the rest free to do regular work. When a pipeline run is deleted, artifacts stored outside of Azure DevOps are cleaned up through a job run on the agents. When the agent pool gets saturated with cleanup jobs, this can cause a problem. The solution to that is to designate a subset of agents in the pool that are the cleanup agents. If any agents have Build.Cleanup set, only those agents will run the cleanup jobs, leaving the rest of the agents free to continue running pipeline jobs.

What happens to file share Artifacts when the build is deleted

Are automated test results that are published as part of a release retained until the release is deleted?

No. Manual test results are not deleted.