When it comes to accessing an Azure DevOps feature, it's helpful to understand the following key concepts.

With the creation of an organization, collection, or project—Azure DevOps creates a set of default security groups, which are automatically assigned default permissions. Additional security groups are defined with the following actions:

The following security groups are defined by default for each project and project collection. You typically add users or groups to the Readers, Contributors, or Project Administrators groups.

For users tasked with managing project-level features —such as, teams, area and iteration paths, repositories, service hooks, and service end points—add them to the Project Administrators group. For users tasked with managing organization or collection-level features —such as, projects, policies, processes, retention policies, agent and deployment pools, and extensions—add them to the Project Collection Administrators group. To learn more, see About user, team, project, and organization-level settings.

For a description of each group and each permission, see Permissions and groups reference, Groups.

Each functional area uses security groups to simplify management across the deployment. You add users and groups through the web administration context. Permissions are automatically set based on the security group that you add users to, or based on the object, project, collection, or server level to which you add groups.

Security group members can be a combination of users, other groups, and Active Directory groups or a Workgroup.

You can create local groups or Active Directory (AD) groups to manage your users.

You can populate security groups by adding individual users. However, for ease of management, it's easier if you populate these groups by using Azure Active Directory (Azure AD) for Azure DevOps Services and Active Directory (AD) or Windows user groups for Azure DevOps Server. This method enables you to manage group membership and permissions more efficiently across multiple computers.

If you only have to manage a small set of users, then you can skip this step. However, if you foresee that your organization may grow, you may want to set up AD or Azure AD. Also, if you plan on paying for extra services, you'll need to set up Azure AD for use with Azure DevOps to support billing.

To set up Active Directory for use with Azure DevOps Server, see the following articles:

Typically, you should install Active Directory prior to installing Azure DevOps Server.

When you add accounts of users directly to a security group, they are automatically added to one of the valid user groups.

This means that all users that you add to one project can view the objects in other projects within a collection. If you need to restrict view access, then you can set restrictions through the area path node.

If you remove or deny the View instance-level information permission for one of the valid users groups, no members of the group are able to access the project, collection, or deployment, depending on the group you set.

Access levels control what features are visible to users in the web portal, and are dependent on user licenses; permissions control a user's ability to connect to Azure DevOps and use features across Azure DevOps. If you're trying to give someone access to Agile portfolio management or test case management features, you'll want to change access levels, not permissions.

Setting the access level for users or groups doesn't provide them access to a project or the web portal. Only users or groups added to a team or security group can connect to a project and the web portal. Make sure your users have both the permissions and the access level they need. You do this by making sure they're added to the project or a team. 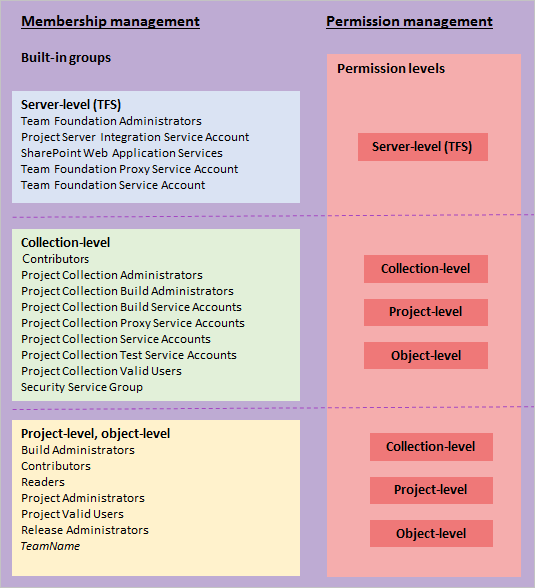 For a description of each default security group, see Security groups, service accounts, and permissions.

There are five possible assignments made to a permission. They grant or restrict access as indicated.

Here's what you need to know about permission settings:

If a permission isn't directly allowed or denied for a user, then it may be inherited in two ways.

To understand why a permission is inherited, you can pause over a permission setting, and then choose Why? To open a Security page, see View permissions. 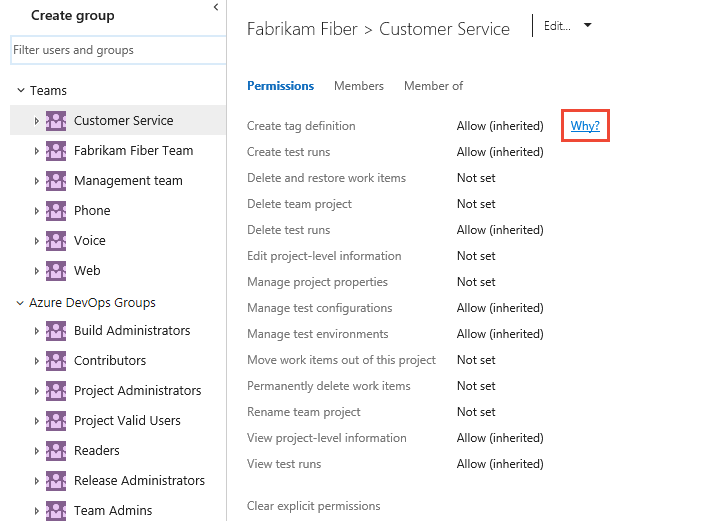 A new window opens that shows the inheritance information for that permission. 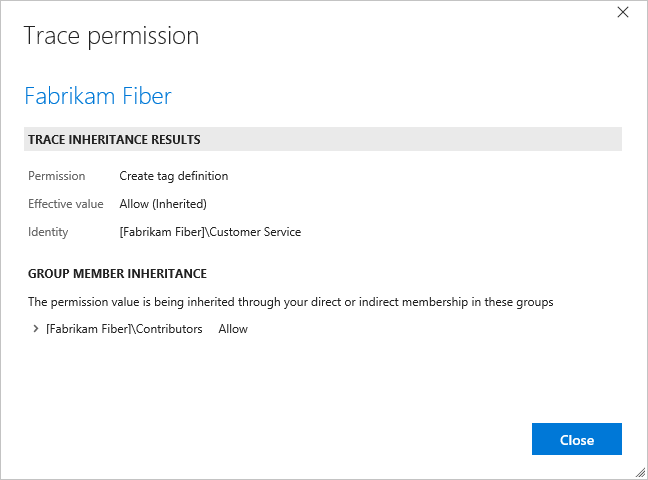 With Role-based permissions, you assign user accounts or security groups to a role, with each role assigned one or more permissions. Here are the primary roles and links to learn more.

Access to select, new features are controlled by feature flags. Periodically, Azure DevOps Services introduces new features by placing them behind a feature flag. Preview features can be enabled or disabled by project members or organization owners. To learn more, see Manage or enable features.