You don't have to debug AddressSanitizer errors when and where they occur. Configure the runtime to create a crash dump that stores all the AddressSanitizer-specific context when an error happens. Then send that crash dump to another PC for debugging. Offline debugging can be a critical timesaver when running AddressSanitizer in the cloud or in distributed testing. You can create the dump on test or production infrastructure where the failure occurs, and debug it later on your developer PC.

The Visual Studio debugger provides precisely diagnosed AddressSanitizer errors. You can view these bugs without having to rerun tests, copy huge datasets, discover lost data, or find test machines that went offline. You only need to load the crash dump.

Crash dumps are created upon AddressSanitizer failures by setting the following environment variable:

The file name must have a suffix .dmp to follow Visual Studio naming conventions.

This dump file can be displayed by using Visual Studio at a later date on another machine.

Consider three machines: A, B, and C. Builds are done on machine B, tests are run on machine C, and you analyze failures on machine A. The errors are reported against source line and column numbers in your source code. You can see the call stack together with a set of symbols in the PDB file produced using that exact version of the source code.

The following steps are for local or distributed scenarios that lead to creation of a .dmp file, and for viewing that AddressSanitizer dump file offline.

Produce a .dmp on a distributed system

The Visual Studio 2019 machine you use for analysis must have access to GitHub or the internal \\Machine\share where your indexed source is stored. 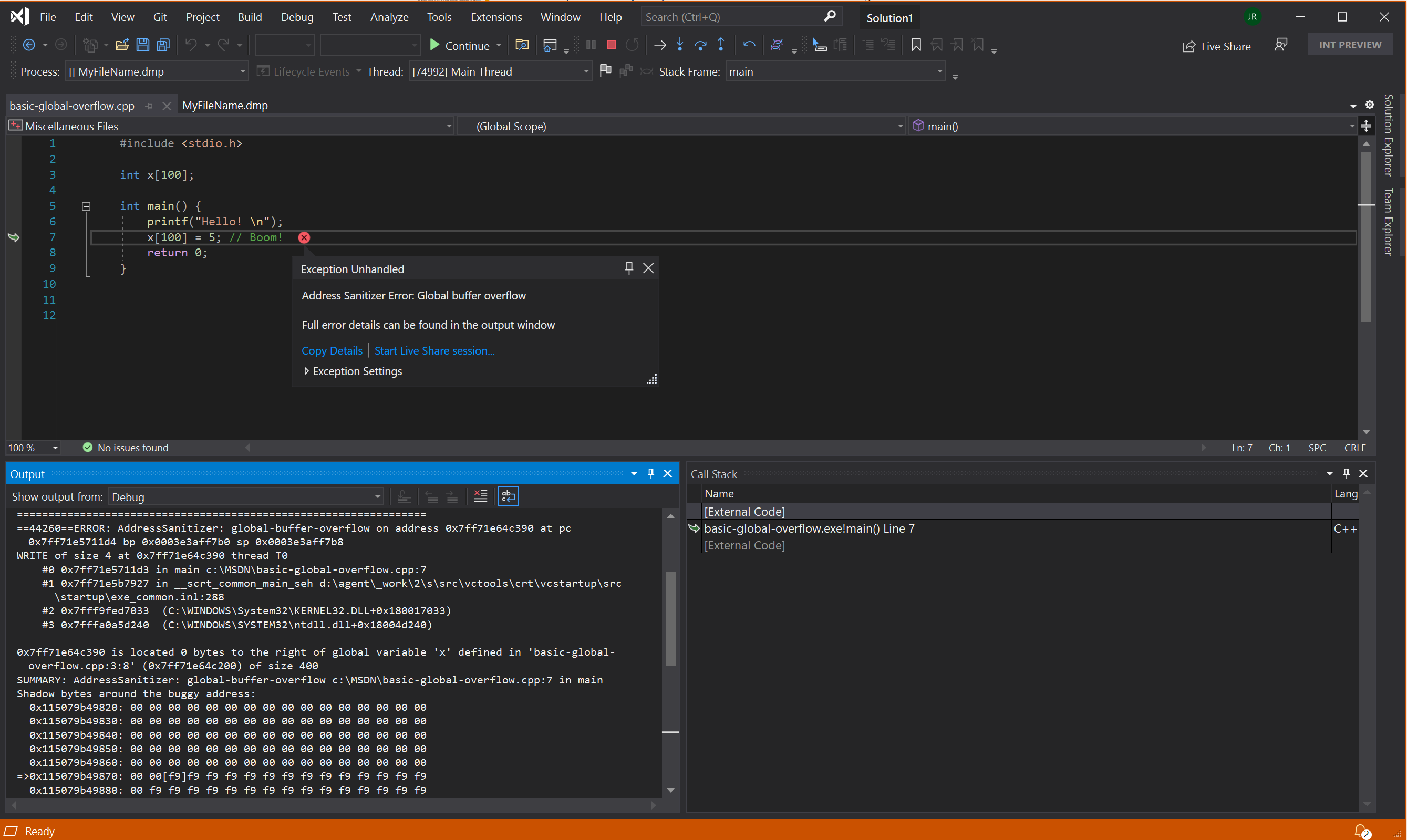 While debugging an EXE with its PDB file, the debugger can use the embedded source server data block to retrieve the appropriate files from source control. It loads the files that map to the fully qualified names put in the PDB automatically by the /Zi compiler option.

To use source server, the application must be "source indexed" by using pdbstr.exe to write a srcsrv data block into your PDB file. For more information, see the Data Block section of Source server and source indexing. You'll find the steps to index sources and publish symbols and how to specify symbols and source code for the debugger useful, too.