How to securely use variables and parameters in your pipeline

Variables can be a convenient way to collect information from the user up front. You can also use variables to pass data from step to step within a pipeline.

But use variables with caution. Newly created variables, whether they're defined in YAML or written by a script, are read-write by default. A downstream step can change the value of a variable in a way that you don't expect.

For instance, your script reads:

A preceding step could set MyConfig to Debug & deltree /y c:. Although this example would only delete the contents of your build agent, you can imagine how this setting could easily become far more dangerous.

You can make variables read-only. System variables like Build.SourcesDirectory, task output variables, and queue-time variables are always read-only. Variables that are created in YAML or created at run time by a script can be designated as read-only. When a script or task creates a new variable, it can pass the isReadonly=true flag in its logging command to make the variable read-only.

In YAML, you can specify read-only variables by using a specific key: 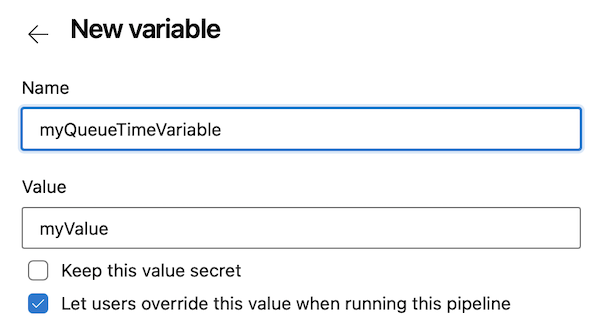 Queue-time variables are exposed to the end user when they manually run a pipeline, and they can change their values.

Limit variables that can be set at queue time

The UI and REST API used to run a pipeline provide means for users to define new variables at queue time.

In the early days of Azure Pipelines, this functionality had some issues:

The setting is designed to work at organization level and at project level.

Lets look at an example. Say the setting is on and your pipeline defines a variable named my_variable that isn't settable at queue time.

Next, assume someone wishes to run your pipeline, and they define the same variable my_variable at queue time.

When they try to run the pipeline, they'll get an error.

Currently, the Limit variables that can be set at queue time setting covers only variables explicitly defined in classic build pipelines.

We're extending the scope of the Limit variables that can be set at queue time setting to cover both YAML and classic build pipelines. We're gradually rolling out this extended coverage.

Once the rollout is complete and the setting is on:

Unlike variables, pipeline parameters can't be changed by a pipeline while it's running. Parameters have data types such as number and string, and they can be restricted to a subset of values. Restricting the parameters is useful when a user-configurable part of the pipeline should take a value only from a constrained list. The setup ensures that the pipeline won't take arbitrary data.